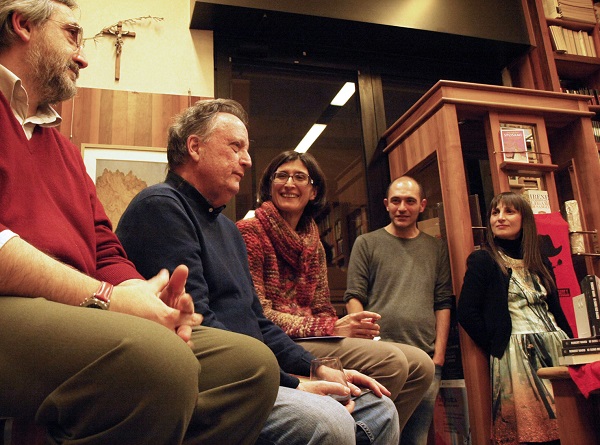 It is Saturday night. In the heart of Rimini, surrounded by noisy bars and cafes, an open bookshop spreads its orange light from the store windows. Out in the street most of the people wander around holding a drink and following the procession that leads from a pub to the next one, but some of them stealthily enter into the little “Libreria Riminese”. Chairs and benches are soon occupied by an excited crowd and even if there is no seat for everyone, nobody complains for standing up. It really seems a secret society meeting, with wooden bookshelves hiding the acolytes from intrusive looks.

We are all waiting for Robert Ward, author of the Pen West Award winning “Red Baker”, now translated in Italian by Nicola Manuppelli. Tonight is just a stage of the long tournée the novel is making all across Italy and the public quivers palpably for the emotion. A few minutes more and the author steps into the bookshop together with his interpreter, Maria Silvia Riccio. Very soon I realize that “Bob” Ward is a character himself: armed with an half-emptied glass of wine, his flabby cheeks red for the Sangiovese, among the Italians he really seems at ease. Writer, teacher, journalist and a Hollywood scriptwriter (but also a blues guitarist), his turbulent career mirrors his private life. There is no trace of the intellectuals’ subtle arrogance though (typical of writers); Robert Ward talks just as a friend or a crazy uncle would do. “Let me tell you the story of this book – he says, grabbing an English copy of “Red Baker” – I had been writing a novel titled “Baltimore” for five years. It was supposed to be my big novel, something at mid-point between Moby Dick and Jane Austen. I wrote about my divorce, six hundred pages of the most boring crap you can imagine. At that time I was working for the New York Times and one night, after coming back home completely drunk, I read through it all. It was a total shit. I became depressed (I always need to feel on the ridge of desperation to write well) and then I wrote a new start. That was Red Baker’s start. The rest of the novel followed and in eight months I finished the book. My agent sent it to 34 publishing houses, but none of them accepted it. I would have shot myself if Jack Kerouac’s girlfriend hadn’t noticed it and helped me to publish”. Robert Ward doesn’t refrain from telling funny anecdotes, such as his memorable interview with Clint Eastwood which lasted two hours but he forgot to record, or when in Mexico he was left behind by the film crew and he (the scriptwriter) had to sing in a bar all night long. The people inside the bookshop are enthusiastic and I have to wait until the last copy signed before starting the interview. He smiles when he sees my recorder.

Mr. Ward, what makes a story a good story?

Jesus, you started with the hardest question in the world… I think a good story is one which reaches people’s heart. Of course you need the ability to plot, create characters, you know that. But after all the technical stuff (which is hard to do) you still have to have a story which reaches people’s heart like great authors like Dickens did. That is the real ability. I know that many people don’t agree with that, like all today’s meta-fiction authors which write stories about story-writing, but I prefer the nineteenth’s century approach with all the vicissitudes and the characters’ analysis. You look back to those stories and they’re still catchy.

Is there something you don’t like in contemporary fiction?

Yeah, generally I hate the Modernist approach where language has become the most important thing. It distances the story from real people. I thought the same with jazz music: after Miles Davies and Coltrane, musicians have based everything on creativity forgetting what the melody is. To me melody in music is like the plot in novels. You forget it, and all you got is noise.

Are there relevant differences between writing novels and writing scripts?

Oh huge differences. In scriptwriting you can’t get into the characters’ heads. It’s all visual. And so you have to find visual equivalents to represent their states of mind. It is hard to do and that’s why many movies are not good in depicting characters. Also dialogues in scripts reveal something about the plot more than something about the character, like in TV shows, and that sucks. But even TV writing has become more sophisticated and this gives depth to every story.

How many languages is “Red Baker” translated in?

Well I think just in German and now in Italian. That’s because as I’ve already said I found many difficulties in publishing it. One day I received a phone call from one of the 34 refusing publishers and this guy said “Bob, I really loved your book, but since it talks about poor people we can’t publish it because poor people don’t buy books. So who’s gonna read it?”. That’s when I thought I should take a gun to my head. Then during the years the novel made its way and lots of people call me saying that it is the best book they’ve ever read. And that’s cool.

What do you think people love in your novel?

They are moved by it. If you pick the book you will see this character doing all the wrong things, but it really compels you to read even if you don’t agree with him. One time a friend of mine called me up at four in the morning and he said “Bob, I’ve just finished reading your book. It’s so fuckin’ good man… It’s like looking at a corpse, you can’t take your eyes off that. You know you should and you want to, but you can’t”. I wish this quote was written on the back of the book.

Where do you usually draw inspiration from?

When I came here I didn’t know that this was Fellini’s city. I saw all his movies and I admire him, he’s a real genius. I particularly liked “Amarcord” (and the guy on the tree shouting “I want a woman!” because that’s me) and “I Vitelloni”, but I also loved De Sica’s “Bicycles Thieves” and the Italian movies from the ’40s and ’50s, which truly inspired “Red Baker”. They were so touching. I guess filmmaking influenced me as much as the novels I read.